L60 (Paris, Grec 375) is an eleventh-century New Testament (NT) Greek lectionary. The NT lectionary is a codex in which multiple NT passages (or lections) were arranged in a specific sequence according to the liturgical year, in order to be read publicly in churches and monasteries. L60 intercalates passages from the Gospels with those from Acts and the Epistles.

At first glance, this manuscript is utterly unimpressive—the parchment used is defective; for the most part, strokes in the handwriting are poorly executed; line spacing is irregular; on many pages, lines are slanted because the scribe sometimes did not use a ruler to guide writing; and decoration is extremely modest, to say the least. All these elements combined make l60 quite unattractive.

But looks can be deceiving. In fact, having consulted approximately 400 lectionaries for my current research, I can say that l60 is one of the most intriguing NT lectionaries on which I have laid my eyes so far. Unfortunately, I cannot describe the many fascinating characteristics of the document in this post; but I would like to highlight here the colophon of l60.

Usually including information about the scribe’s own identity and chronological and geographical details, the colophon can be extremely useful for scholars in tracing the historical settings of a given manuscript. The fact that colophons can be useful for this task does not mean they always are. Scholars should carefully analyze the accuracy of the data conveyed in the colophons before making definitive statements about the history of manuscripts.

The Colophon of l60

The colophon of l60 provides details about its person, place, and time of production.

The colophon reads: “This eklogadion [book with selected biblical passages] was completed by the hand of Elias the Cave-Dweller, priest and monk, on Sunday November 26th, at hour θ [9th hour], in the year 6530 [1021] of the 5th Indiction, in the Frankish village Castro de Colonia.” There are three pieces of information in this colophon that deserve separate comments.

1. The Place of Production

The first detail concerns the place of production: we read that l60 was copied in a Frankish village named Castro de Colonia. 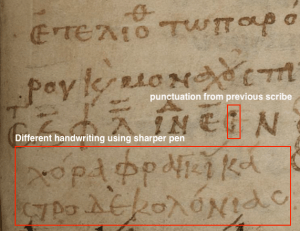 Although the ink used to write this phrase looks similar to the one used to write the colophon, it is quite clear that the handwriting differs from that of the colophon. The strokes also point to a sharper pen compared to that used for the rest of the content. The previous writer ended the colophon after ετ[ους] ςφλ ινδ[ικτιωνος] ε with the marker (:). A later scribe obliterated the punctuation and added the geographical detail. There is no space here to elaborate on the specifics of the location Castro de Colonia, but the numerous annotations in Latin throughout the manuscript indicate l60 was used in Latin contexts.

2. The Scribe Who Copied the Manuscript

The second and probably the most intriguing element in this colophon is the scribe, identified here as Elias the Cave-Dweller or Elias Speleotes, a hermit who practiced rigorous asceticism and lived in the region of Calabria (Southern Italy). Reconstructing his life based primarily on one fourteenth-century manuscript, the Bollandist Society has placed his death in circa 960.[1] According to l60, however, Elias wrote the manuscript in 1021. Since Elias was an extremely influential monk, priest, and abbot of the rock monastery of Melicuccà (Calabria) whose relics allegedly performed miracles, and since l60 was clearly used in a Latin-speaking context which was the primary realm of influence of Elias Speleotes, it is highly unlikely that someone living only 60 years after his death would dare to impersonate him. Any attempt to overthrow the date for Elias’s death as suggested by the Bollandists, then, would be premature.

The best explanation for this apparent discrepancy, as Lake suggests,[2] is that the scribe who actually copied l60 also replicated the colophon from an exemplar which Elias Speleotes had produced. It is very probable that the scribe was someone in the sphere of influence of Elias. This lectionary, therefore, is more likely an indirect evidence to the scribal activities of the Calabrian saint.

3. The Year the Manuscript Was Copied

The third and final detail in the colophon concerns the year 1021 as part of the original composition. Besides the fact that Elias Speleotes most likely died before the year 1000, note carefully in Image 3 that the letters that signal the year are oversized compared to the rest of the colophon. 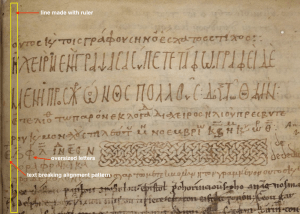 Additionally, letters such as ε, ς, and ν point to a handwriting distinct from that of the colophon. Finally, the writing is far too close to the spine, thus breaking the alignment pattern set forth by the first scribe, who traced a vertical guiding line with a ruler in the left margin and followed it with precision. This pattern is broken once again further down the page by the hand who wrote the Greek text with Latin-looking characters and in darker ink. These observations strongly suggest that the chronological information was added later, although we must be cautious about making absolute claims. In this case, 1021 would function more as a terminus ante quem than as the definite year of production of l60.

The Colophon of l60: How Trustworthy Is It?

The original colophon of l60 most likely ended after ωρα θ with (:). A later scribe added the information about the year, which ends with ινδ[ικτιωνος] ε and (:). Finally, the geographical detail was added posteriorly. So, WHO, WHEN, WHERE? Most likely not Elias Speleotes; certainly before 1021 but not necessarily in 1021; undoubtedly somewhere in the West, possibly Italy. In the end, the colophon of l60 provides a great example of the dangers involved in blindly trusting the information conveyed by colophons while reconstructing the history of manuscripts. 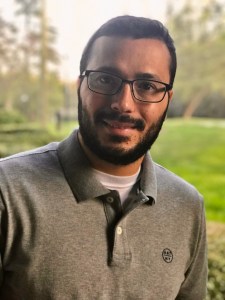 Denis Salgado is a PhD student at the University of Edinburgh, where he is currently investigating the textual tradition of Romans as transmitted in the Greek Apostolos lectionaries. Besides analyzing NT Greek manuscripts, Denis really enjoys to explore the beautiful city of Edinburgh with his family and friends.