Since January 2015 I (Dr. Daniel B. Wallace) have been examining New Testament manuscripts at the National Library of Greece in Athens so that teams from CSNTM can then digitize these manuscripts. Ten of us were in Athens for two weeks in March. I had a superb assistant working with me, Kyle Fischer, one of CSNTM’s current interns. Rob Marcello, CSNTM’s Research Manager, led a team of stellar digitizers: Jacob Peterson, Stratton Ladewig, David and Marcy Long, Andy Patton, and David Smith. Christina Nations, CSNTM’s Development Manager, was there for a week documenting everything all of us did with thousands of photographs!

This was our second trip to Athens this year. The last one was at the beginning of January. We are gearing up for the conclusion to our two-year expedition this coming summer when we will finish digitizing all of the New Testament manuscripts at the NLG.

What was peculiar about these three MSS was that no NLG shelf number was mentioned in the Kurzgefasste Liste. They were originally examined by Caspar René Gregory back at the turn of the 20th century. We already knew that at least two of the lectionaries were partial MSS (l 1315 and l 1321). And we had the data on the leaf count, dimensions, date, material, and other features on these two. I passed on the information from the K-Liste to the library staff last year, but they were unable to locate any of these lectionaries without the key item—the shelf number.

On this latest trip, I wrote to the INTF and asked if they had any other data on these codices. Klaus Wachtel wrote back and informed me about Kurt Treu’s follow-up research on Caspar René Gregory’s initial description. Treu felt NLG Sakkelion 294 may well be one of the MSS that Gregory had identified as a lectionary. I passed on this shelf number to the Manuscript Room librarian and she produced a handsome, thick medieval codex with embossed leather over wood boards. It was the text of John Climacus (a.k.a. Scholasticus), 684 pages in all.

The 1994 Kurzgefasste Liste has a question mark for the shelf number while the online K-Liste simply says “Vor- und Nachsatzbll.” (i.e., leaves at the front and back of the codex), without giving a shelf number. What was at the front and back of this codex was indeed the remains of an Apostolos lectionary—lections from Colossians, Acts, and 1 John. The leaves were sewn in perpendicularly to the rest of the codex. They were from a much smaller book, the height of which was about the same as the width of the Climacus text. And these leaves were actually double leaves or bifolia—one at the front and one at the back, with a small fragment of a leaf also in the front.

Our examination of the lectionary came close to INTF’s description. But instead of 9 x 12.5 cm for each leaf, we have 10.7 x 13.2–13.3 cm. And the width is actually just what is present, not the original size of the leaves since the bifolia have been trimmed to fit in as buffer leaves for the codex. Furthermore, we counted 25–27 lines per page, while Münster has 25–28. Nevertheless, this is most likely the MS that the K-Liste describes. Our measurements are almost always a bit different from INTF’s. Normally, this is due to two reasons: First, they seem to be basing their measurements on very old catalogs (or, in this case, Gregory’s Textkritik). Over time, parchment MSS tend to shrink in size. What seems inexplicable in this instance, however, is that INTF’s measurements are actually smaller than CSNTM’s. But we have found this to be the case on many occasions too, though it is less common than the reverse. Second, CSNTM gives a range for the size while INTF gives just one measurement for each dimension. For these two reasons almost 100% of the CSNTM dimensions differ from INTF’s.

But is it the same as what Gregory saw? His data agree with INTF’s except that he lists the line count as 25–26. That’s a trivial matter, since line counts tend to differ a bit from researcher to researcher. He also says that this is in a MS of Climacus with an unknown number of leaves, written in the fourteenth century (Textkritik 1.470, where he gives the lectionary number as 97; it has since been changed to l 1315). Gregory dates this note to 1886, six years before the NLG’s catalog was published. The main body of the codex has been foliated, presumably since Gregory looked at it (though before he published his Textkritik). 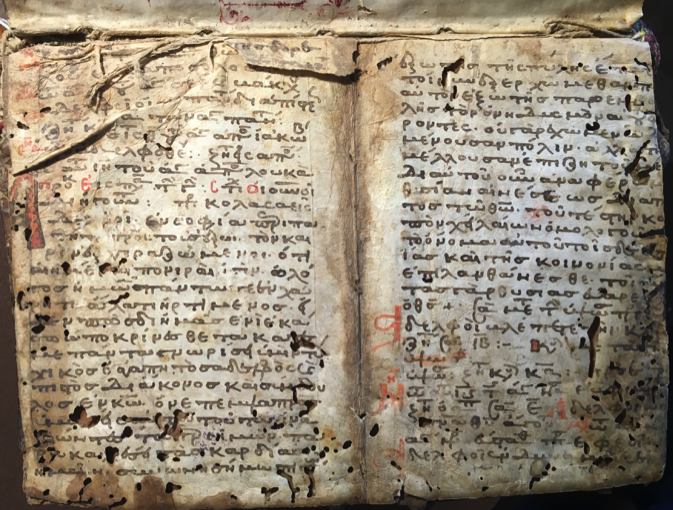 iPhone picture of NLG 294—buffer leaf at front of codex

At bottom, it is our assessment that NLG 294 is l 1315. CSNTM has ‘discovered’ twentyNT MSS at the NLG in the last two years that are not yet catalogued by Münster. Most of these were known to the library, but some were entirely new finds. NLG 294 is not counted among these; the twenty we have discovered all have different shelf numbers. In our final trip to Athens this summer we will digitize this MS with professional cameras and thus, we hope, erase the question mark on one of Gregory’s lost MSS at the National Library of Greece.