CSNTM photographed GA 545 in 2008 on an expedition to the University of Michigan’s library in Ann Arbor. At first glance, it appears similar to its contemporaries with its minuscule script. However, each individual manuscript does more than simply contribute to an enormous textual tradition of the New Testament: it has its own unique story to tell.

GA 545 contains particular textual features such as the scribe’s name, detailed iconography, and a developed use of nomina sacra. In the spirit of the season, we will investigate these features within the manuscript’s nativity accounts (Matthew 1–2 and Luke 1–2).

GA 545 is a Gospels minuscule or tetraevangelion (“four Gospels”) on paper. The codex belongs to a collection of manuscripts that the University of Michigan Library purchased from Baroness Burdett-Coutts in 1922 (see Kavrus-Hoffmann’s Catalogue of Greek Manuscripts at the University of Michigan, 83). A colophon found towards the end of the manuscript allows for easy dating and reveals the codex to be a fifteenth-century production–A.D. 1430 to be exact.

The scribe, Theodoros Kotzas, revealed his own identity along with the name of the manuscript’s commissioner, Nikolaos of Lardea. Decorated canon tables, headers, and icons also adorn the copying work of Theodoros.

Greek New Testament manuscripts often display author portraits to introduce each Gospel. In GA 545, however, two additional icons decorate the leaves directly before the beginning of Matthew (fol. 15b and 16a).

Kavrus-Hoffmann dates the two images as older than the codex’s production, added at a later time (Catalogue, 81). While similar images of the two nativity characters adorn church walls, wood panels, and other Christian works, readers rarely find them in Greek New Testament manuscripts. GA 545, though, contains these special images with Matthew’s account of the Christmas story. Notice the icon’s title written in the top right corner of the page: ἡ Φοβερα Μεσιτεια, most likely understood to mean “the great intercessor” at the time of the painting (see entry φοβερός in Sophocles, Greek Lexicon of the Roman and Byzantine Periods, 1148).

Mary plays a notable role as we observe the nomina sacra in GA 545’s Christmas accounts. Contracted forms of μήτηρ, one of the later nomina sacra to develop, appear throughout Theodoros’ manuscript. One such superscription appears in the icon above depicting the infant Jesus and his mother (Μ̅Η̅Ρ̅ Θ̅Υ̅ “mother of God”).

The μ̅η̅ρ̅ contraction and its related forms were frequently used to show reverence to Christ’s mother, though some scholars have suggested that the word might have developed its sacredness due to the divine role of the Church as a sort of mother-figure (Paap, Nomina Sacra in the Greek Papyri of the First Five Centuries A.D., 113). Codex Sinaiticus (GA 01) includes this contraction in Luke’s nativity account, showing that the abbreviation was in use as early as the fourth century A.D. 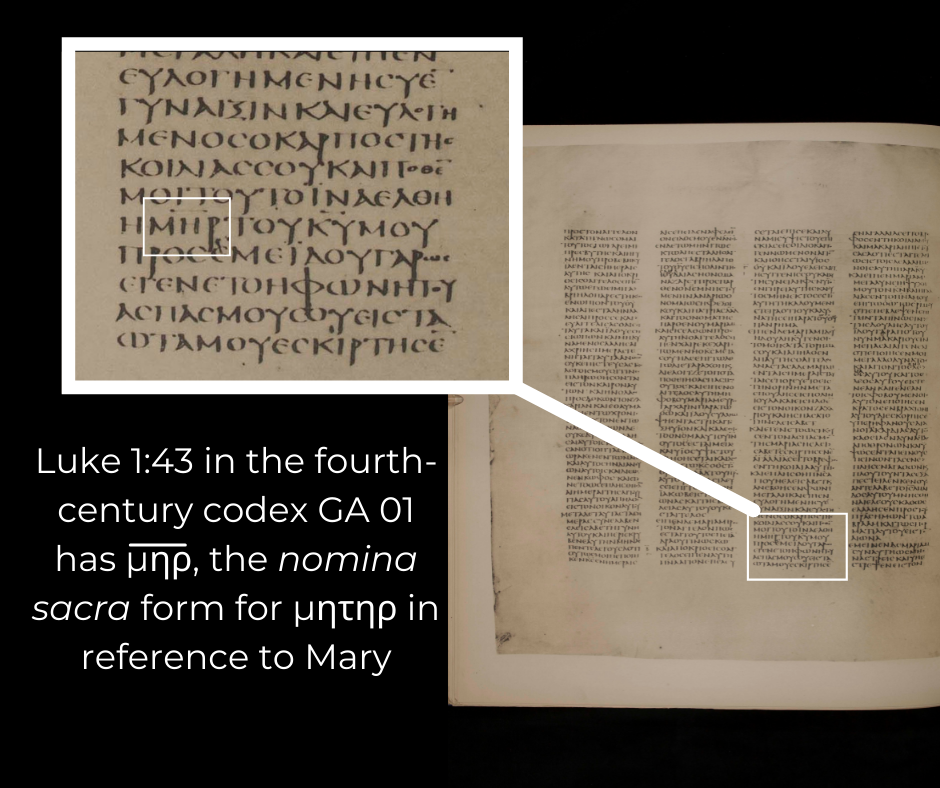 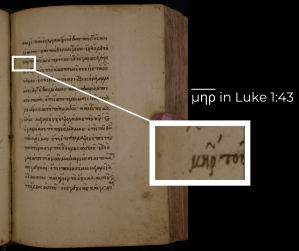 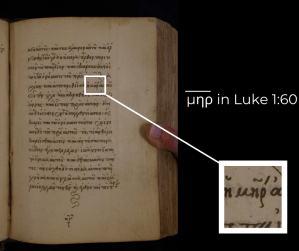 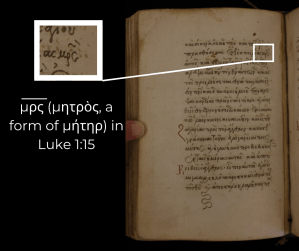 In the above images, the contractions in Luke 1:43 and 1:15 both refer to Mary; but μ̅η̅ρ̅ in Luke 1:60 refers to Elizabeth, Mary’s cousin.

The consistent contraction of the noun μήτηρ in the Nativity accounts, along with the appearance of the nomina sacra θεός (“God”), χριστός (“Christ”), κύριος (“Lord”), υἱός (“son”), Ἰσραήλ (“Israel”), πνεῦμα (“spirit”), πατήρ (“father”), ἂνθρωπος (“man”), Δαῦιδ (“David”), and σωτηρίας (“salvation”) (NS for σωτηρ or “savior” with ending -ιας added) make GA 545 a prime example of the developed use of nomina sacra.

The various features discussed above provide a glimpse into the communities which once read the Nativity from handwritten copies. The birth of Jesus held such significance that images of him and his mother appeared in many places. Similarly, certain figures and concepts in the text were so sacred to the community that scribes wrote the words differently to set them apart—a practice that continued for centuries.

The story of the Nativity retold so frequently this time of year made its way to us because generations of commissioners, scribes, and communities preserved it and passed it on. The Christmas-themed images and words in GA 545 are a reminder that Christians have valued this story for centuries–ensuring that it be wonderfully adorned, highly regarded, and painstakingly preserved over time.