Skip to content
By: Sarah Chapell, Guest Contributor CSNTM owns and digitized New Testament Greek manuscript GA 2882. Written on parchment, the manuscript contains all but one leaf of the book of Luke and an introduction to the book of John. It dates back to the 10th–11th century. The term “singular readings” refers to those words or phrases that appear in only one manuscript copy. GA 2882 contains quite a few interesting readings that appear only on its pages (29 to be exact), but we find a particularly interesting one in Luke 6:22. The scribe omits the phrase ἕνεκα τοῦ υἱοῦ τοῦ ἀνθρώπου (“on account of the Son of Man”) from the end of the verse.[1] Biblical scholars commonly refer to this section of scripture as Jesus’ Sermon on the Plains. Should we consider this anomaly a scribal error or a purposeful deviation from the Majority Text?

Why This Question Is Complex

Scholars utilize a wide variety of language and terminology to describe the phenomenon of scribal anomalies in the manuscripts, and this variant highlights the problem: how do we categorize an unexplained variant when many possible explanations for it exist? Those who have attempted to write more general works on the habits of scribes add particular confusion into the mix. With each new work on the matter,[2] it appears scholars have attempted to coin their own categories to describe these types of variants. In so doing, much confusion and inaccurate/inappropriate overlapping has occurred within the field,[3] thereby making interactions with existing research difficult. Studying scribal habits and their changes to the text is certainly not a new endeavor. E. C. Colwell expanded the brief discussions of Westcott and Hort in his Studies in Methodology in Textual Criticism of the New Testament.[4] Others, like James Royse, Peter Head, and Dirk Jongkind, have since contributed expanded studies using collations of individual manuscripts to study the habits of their respective scribes. For most introductory writers, inexplicable variants seem a rather pointless category to waste precious book real estate on.  But the existence of the category has large implications for how students new to the field of text criticism understand the scribes and the manuscripts in a general sense.  Without a good grasp on the category, one may misunderstand, and therefore misinterpret, the findings of a collation or textual problem. Metzger and Ehrman provide one of the standard introductions for many New Testament students learning the basics of textual criticism. They outline the causes of error in New 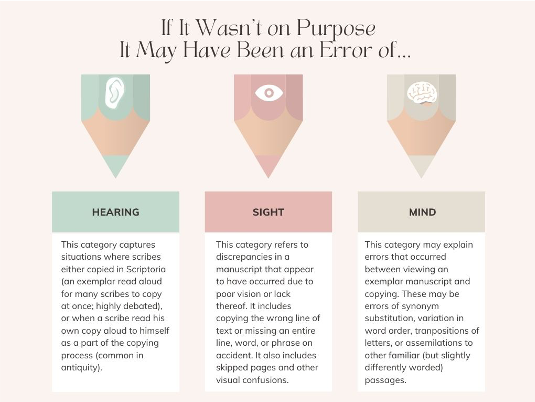 Testament transmission and provide an outline for unintentional versus intentional changes to the text. The unintentional category only includes explainable errors: ones arising from faulty eyesight, faulty hearing, errors of the mind, and errors of judgment.[5] Readers may realize that Metzger and Ehrman’s “errors of judgement” 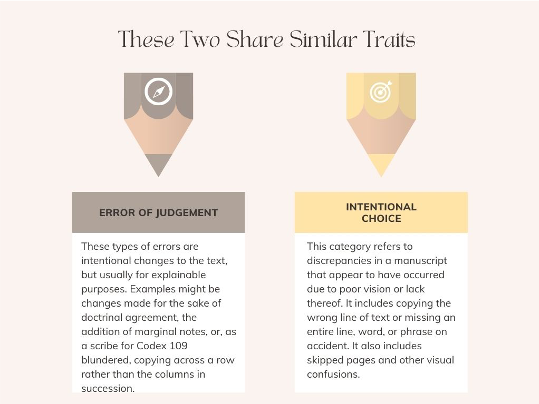 sometimes share similar qualities with “errors arising from faulty eyesight.” They also have similar characteristics to certain types of “intentional changes” mentioned later in the book. Students new to the field may already find themselves lost in muddy terminology. Rest assured, you aren’t alone! In his own chapters on such variants, Colwell includes “the nonsense reading” as those errors clearly “objectively demonstrable.” He says they do “not make sense, and/or cannot be found in the lexicon, and/or [are] not Greek grammar.”[6] Royse calls them “nonsense readings” but makes sure to distinguish between “nonsense in context,” and “strictly nonsense.” Hernandez and Paulson follow suit, adding separate categories such as “no explanation” and “inexplicable” (respectively). Bell calls them “unique.” Wasserman refers to them as “peculiar.” On and on the list goes for terms used to try to communicate the same basic idea: there are variants found in the manuscripts that do not make sense. Obviously, the variety of terms to describe the same phenomenon gets confusing quickly.

Several of the singular readings in 2882 appear to show signs of possible errors in hearing. Therefore, the variant could potentially help point scholars to establish hearing errors as a pattern of the scribe, which may give text critics information about the copying of 2882 that assists in other text critical interpretations and translation decisions. 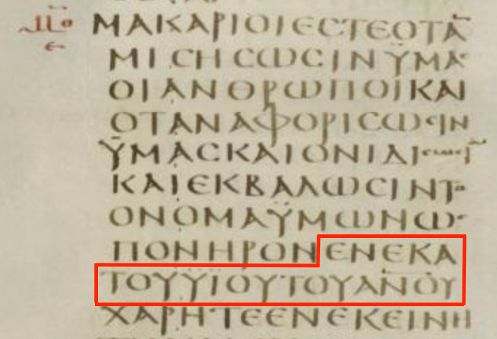 If we look at the columns containing the same verse in manuscript 01, we see the majority of the missing phrase contained to one line of text. Therefore, another possibility besides error of hearing may involve an error of sight. Perhaps the exemplar text of 2882 followed a similar column-like layout to that of 01 on which ἕνεκα τοῦ υἱοῦ τοῦ ἀνθρώπου appeared on the same line. This would mean that the omission has no significance other than telling us that the scribe needed a break away from his copying—or perhaps a good nap! However, a third option remains. Perhaps the scribe of 2882 omitted the phrase on purpose. Perhaps he made the theological decision to refuse the hatred, insults, and rejection referenced in the passage to Jesus himself. Or perhaps the issue is a Christological one – whether or not the scribe (or 2882’s exemplar) wanted to reference Jesus using the title “Son of Man.” The phrase seems too perfectly cut to chalk up its omission to an error of sight or hearing. Within the context of the entire passage, these options would not seem to cause significant change to the gospel’s theological stance on Jesus. But without full analysis on the collation of 2882 including a comparison to other manuscripts of its time, the scribe’s general tendencies toward similar passages of Christology remain a mystery.

Greg Paulson’s dissertation on the book of Matthew on Sinaiticus, Vaticanus, Ephraemi, Bezae, and Washingtonianus offers an expansion of categories to address those variants not so certainly or easily explained. His approach borrows from earlier contributors like Colwell and Royse, but expands their terminology in a more streamlined way which proves (better than most) particularly helpful in identifying the habits of a scribe within a specific manuscript. This allows for very clear direction for future scholars to build off of his research. For instance, through categorizing the singular readings into Paulson’s clearly labeled categories, the scholar may quickly distinguish between tendencies of an entire manuscript, an entire book, or in some cases, of two different scribes who may have worked on the same manuscript.[7] While Paulson’s dissertation seems more helpful in addressing the problematic variants than some scholars who came before him, confusion continues (specifically between the category of “nonsense in context” and “inexplicable changes”). Paulson has organized his list of variant causes (without directly saying it) by their source—mind, sound, eyes, choice, etc. A solution to the inconsistent treatment and terminology within such an ever-evolving niche of the field may elude us. However, perhaps rather than organizing the discussion of singular readings by their potential cause, we could categorize variants based on the happenings within the text. Has omission caused a perplexing textual pickle? Addition of a phrase or word? Unexpected word order? Perhaps labelling the result in the text (which is known) rather than the cause (which is unknown) would help make sifting through large masses of data more user-friendly. Hypotheses of cause will continue adding to the conversation of scribal anomalies—but unified organization of the date can make the conversation more consistent among scholars whose hypotheses widely vary.

A Call for Unified Terminology 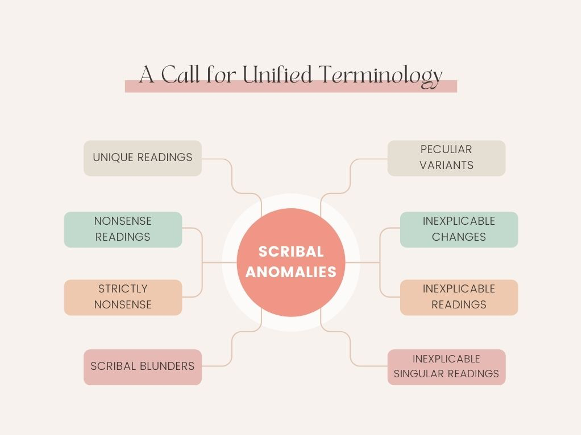 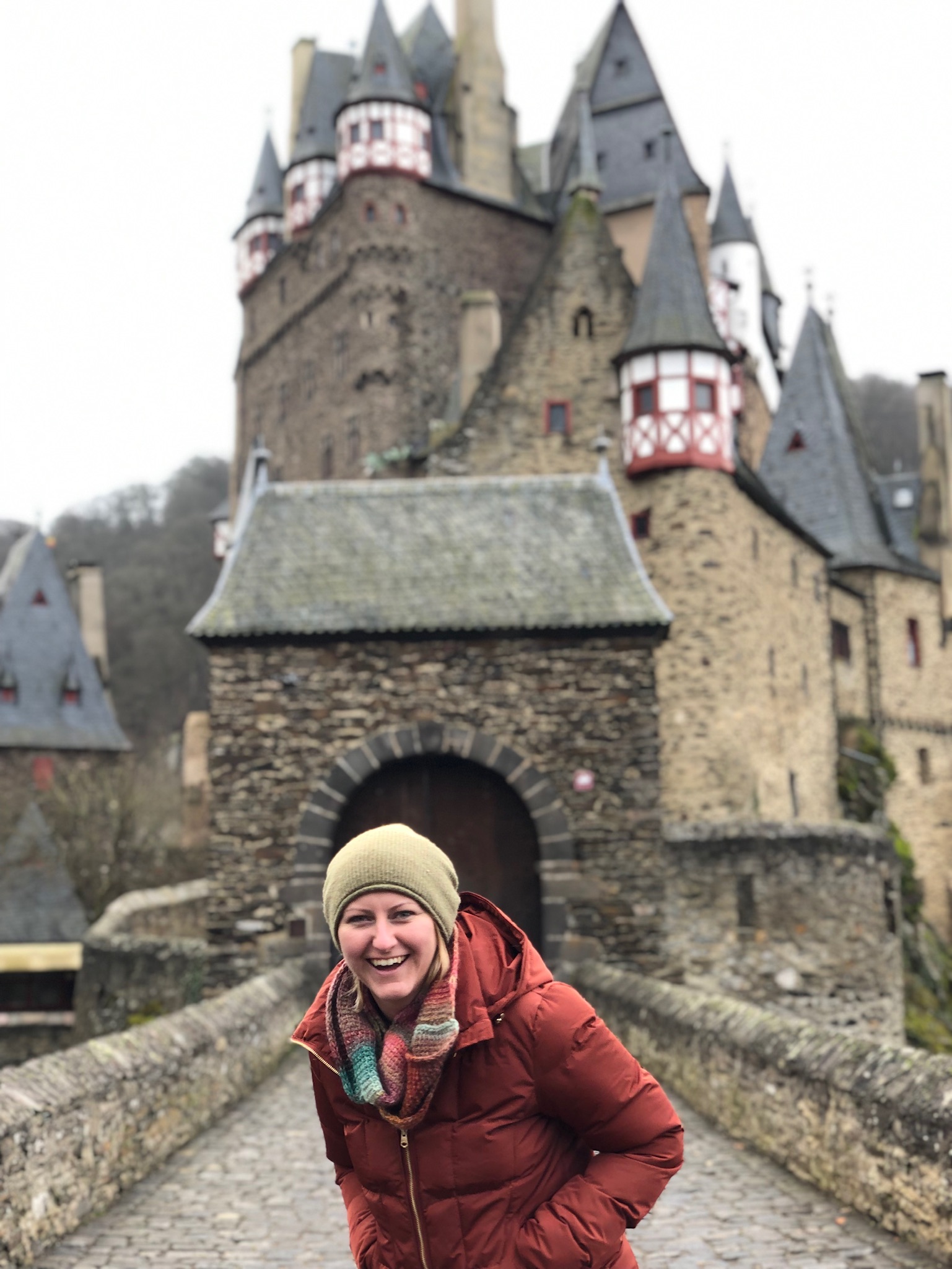 Sarah Chapell served as an intern for CSNTM from 2019–2020. Her research term paper “Scribal Anomalies and Blunders: A Call for Unified Terminology” calls for an adjustment in terminology for inexplicable or unique variant readings in New Testament manuscript studies. She provides an overview of interesting singular readings found throughout the manuscript tradition in order to prove that differences among manuscripts exist—even early on—and that unified terminology would highly benefit the continued study of scribal habits and translation decisions. Sarah is a current Th.M. student at Dallas Theological Seminary pursuing an emphasis in New Testament Studies. She lives in Arlington, Texas with her husband Josh and their two daughters, Hannah and Addie.