With specially designed passports in hand, guests of Snapshot on October 23 traveled through time with the CSNTM staff. A unique arrangement of CSNTM’s artifacts and equipment allowed visitors to walk through different periods of the New Testament text’s development—no flux capacitor needed.

The tour began with facsimiles of papyrus manuscripts and moved to early printed editions that had used manuscripts to construct their text. It finished with the most recent critical editions, which employ the enormous body of evidence made up of thousands of New Testament manuscripts. The whole trip revealed the long process that forms current New Testaments and underscores the significance of high-quality digital images of manuscripts. 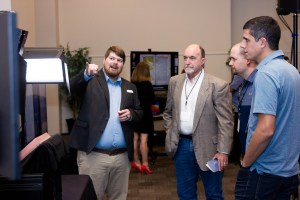 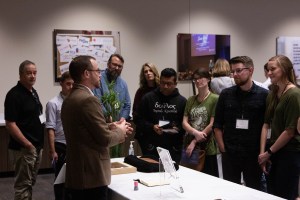 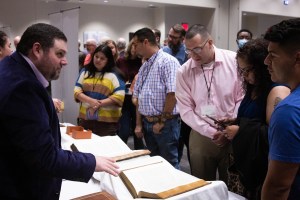 Guests returned from trekking through past centuries to catch up on the present. Mark Gaither shared CSNTM’s updates, highlighting the newly acquired, state-of-the-art digitization equipment. The DT atom, displayed for visitors at the event, allows the CSNTM team to take better images more efficiently, thus improving CSNTM’s ability to provide resources for scholars. 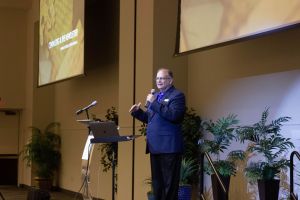 Dr. Dan Wallace then took the podium. While sharing some of his great hopes for CSNTM, he emphasized the importance of truly grounded evidence. Truth, he noted, must result from source rather than speculation. In a recent trip to the United Kingdom with Dr. Elijah Hixson, with Dr. Elijah Hixson, he examined a manuscript that some have claimed contains a particular text–but he found the reading not original to the artifact. The so-called “original reading” is written in a different and later hand. 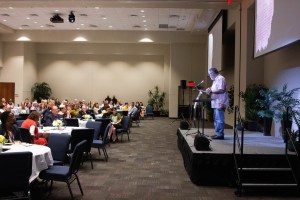 CSNTM continues to pursue truth by providing access to excellent images of Greek New Testament manuscripts and promoting their study. As a small organization, CSNTM cannot complete the task alone. Supporters fill in the gap and move the mission forward! We want to thank all of our guests for traveling with us through Snapshot’s Text through Time display. Our team greatly appreciates support in this crucial work of preserving manuscripts and providing access for scholars who are also eager to pursue truth.

For some snapshots of Snapshot, see the gallery below!